Sewer School: What is Light-based Curing for CIPP?

In the world of trenchless pipe repair, light-based curing is a more recent advancement for installing cured-in-place pipe (CIPP). It’s also become a favored one for a handful of reasons. 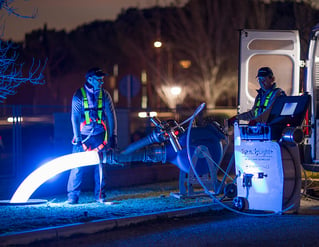 Generally speaking, CIPP involves inverting or pulling a resin-impregnated flexible felt or fiberglass liner inside a damaged pipe and inflating the liner until it’s pressed firmly against the inside walls. The liner is then exposed to heat or a specific wavelength of light to cure the resin. This process is designed to restore the host pipes structural integrity and seal out infiltration, while avoiding more drastic and costly alternatives like dig-and-replace.

Traditional methods of CIPP are cured using heat, which is delivered using hot water or steam. For light-based curing, a specialized light head is pulled through the pipe at a defined rate of speed. The head delivers high-energy radiation that initiates the cure of the liner’s resin. Typically, these systems are also equipped with a camera, giving operators the ability to monitor and control the process in real-time from start to finish.

Light-based curing has become increasingly popular in the U.S. in recent years, proving to solve many of the shortcomings of traditional hot water and steam curing.

Light-based curing requires substantially less time and energy than heat-based methods. Without the need for water transport and a large boiler, there is also a smaller construction footprint—reducing disruption to road traffic and allowing operators to access lines in confined areas.

With light-based curing, there are no styrene or amine emissions due to encapsulations which lock it in place. This makes it easier to perform CIPP in neighborhoods or populated areas where the associated odors may raise concern from the general public. 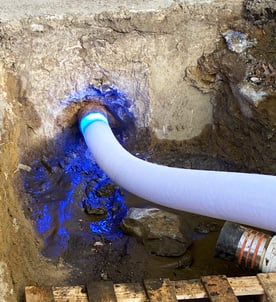 Another advantage to light-based curing is increased safety. Using light instead of heat reduces the risk of injury to operators, and faster cure times mean less exposure to traffic around the job site.

Versatility and Ease of Use

Unlike curing with hot water or steam, light-based curing can be used on both felt and fiberglass liners, offering versatility when confronted with bends or transitions in a line.

The workability and ease of use with this curing method are also common draws. The camera on the curing head allows operators to monitor what’s happening in real-time, and with complete control over the system, they can turn the light on and off to pause and resume the curing process whenever needed. With hot water or steam, on the other hand, there is no option to pause or make local adjustments, and operators don’t know whether the line is successfully cured until after the job is complete.

With light-based curing there is also no on-site wet-out required, no mixing of resin and no refrigeration needed—reducing the responsibilities of the operator and overall time on the job site.

Different methods of CIPP are appropriate for different applications, though all serve the same purpose: to restore a pipe’s structural integrity without invasive and costly dig-and-replace. Light-based curing continues the evolution of CIPP, a technology that has revolutionized sewer rehabilitation in the 50 years since it was first conducted.

To learn more about SpeedyLight+ and see it at work, request an on-site demo today: