Jeff Warner, owner/president of JPW Properties, was in a difficult situation that could have cost him his business. During a post-installation inspection, the Cape Fear Public Utility Authority (CFPUA) found chips and tuberculation on some of the pipes that JPW Properties installed in a townhouse community. The CFPUA gave JPW Properties two options—either pay a local CIPP contractor $300,000, or repair the failed pipes. 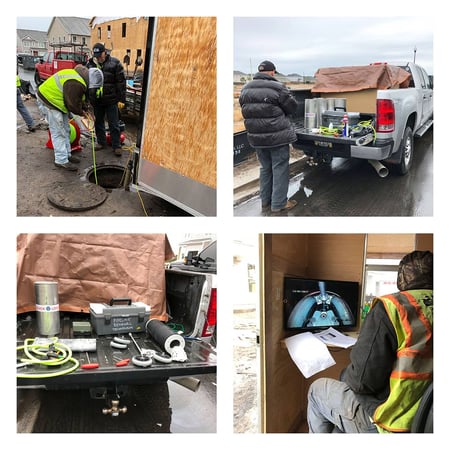 Founded in 2011, JPW Properties started off in the commercial site clearing and pipe installation business. “I’ve seen how quickly a business can fail, especially when they aren’t open to new ideas,” Warner says. “When the CFPUA came to me with the issue I was very worried—$300,000 was a hefty fee to pay for the fix. My relationship with CFPUA was very important and I needed to find a way to save my business while also satisfying them.”

He started looking into different options to repair the pipe and found that the most common solution seemed to be CIPP. “This solution was not cost-effective, nor easy," Warner says. "CIPP takes away ¼ of an inch from the pipe diameter and requires at least four hours of cure time per pipe segment.”

Warner talked to Reed Davis, his trusted contact at Public Works Equipment and Supply, who then introduced him to the team at Pipeline Renewal Technologies (PRT) and a solution: Quick-Lock point repair. The PRT team came out and did an in-field demonstration of the Quick-Lock point repair system. Quick-Lock is a stainless steel sleeve that structurally reinforces deteriorating sewer pipes. It’s delivered to the repair location on a wheeled flow-through packer pushed by a CCTV crawler. Once in position, air pressure supplied to the packer expands the sleeve tightly against the host pipe wall—sealing up any defects in the pipe. “It was the exact solution we were looking for,” says Warner. “Quick-Lock was so much neater, more cost-effective and efficient than any other solution we looked at.”

JPW Properties quickly invested in the Quick-Lock point repair system and got to work. “We were able to remedy the issues that CFPUA came across, and most importantly we were able to repair the relationship we had with the CFPUA as they were equally impressed with what Quick-Lock could do,” says Warner. The CFPUA liked the fact that Quick-Lock’s point repair sleeves were 1/16th of an inch. This meant the flow impact of the repair was minimal. The best part? Using Quick-Lock, the whole repair only cost JPW Properties $75,000—saving them over $225,000 had they used the alternative.

Now, JPW Properties has added point repair to their menu of services. “After repairing pipes with Quick-Lock, I realized that point repairs could be more lucrative than the new construction business,” says Warner. “This was a great opportunity to pivot my business and ensure that I continued to stay ahead.” Since adding point repair as a service offering, Warner has increased revenue by 15%. Within the last five months, the JPW Properties crew has installed over 100 Quick-Lock point repair sleeves. “Who would have thought that a problem that was supposed to cost me tons of money could become a blessing in disguise and actually increase my profits in the long-run?”

“The best thing since sliced bread is a common phrase used to describe something innovative, awe-inspiring and extraordinary,” says Warner. “For me, Quick-Lock point repair solution is just that.”

Learn more about Quick-Lock point repair and request a demonstration: