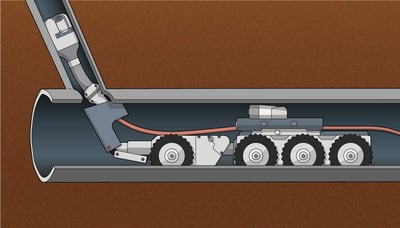 Sewer laterals often don’t get much attention during regular CCTV inspections. Because homeowners are responsible for their care, they are frequently left off the usual schedule. This can leave a large portion of a collection system un-inspected, un-repaired and ready to cause problems. When laterals do end up on the docket, it’s usually for one of three reasons:

Outside of these three scenarios, cities rarely perform lateral inspections. Still, degraded laterals can have a major impact on the wastewater collection system as a whole. Private sewer laterals typically make up about half the total length of a sewer system and can account for roughly 40% of a system’s inflow and infiltration (I&I). Given the recent push to eliminate I&I, municipalities may want to identify all sources, not just ones the city is responsible for. Ensuring sewer mains are clear and intact is only half the job.

In fact, neglecting laterals has such a large impact on the entire collection system that it can undermine many of the benefits of mains improvement. For example, EPA studies show that repairing mains can cause the water table to rise as groundwater loses escape routes. This can cause unforeseen I&I in laterals. Additionally, while lateral repair may not initially seem cost-effective, the effects can have ripple. If repairing laterals “prevents peak flows from exceeding maximum design flows at lift stations or at the wastewater treatment plant (WWTP), or if it eliminates the need to upsize parts of the collection system,” it’s likely worth the cost.

Ultimately, the choice of whether to inspect or not comes down to time, expense and focus. Utilities should have a plan for how to use inspection data once they have it. To learn more about why cities should inspect and what it means for their operations, check out this resource from the EPA: