West Branch Regional Authority Gets Sewer System Back on Track

The state of Pennsylvania and the Department of Environmental Protection (DEP) were placing intense pressure on Montgomery and Muncy boroughs, forcing them to make major changes and improvements to their aging and failing sewer infrastructure. 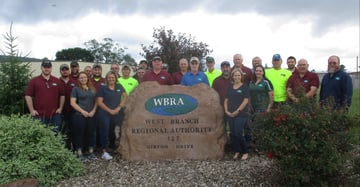 The boroughs needed to completely renovate both of their sewer plants and address the large amounts of groundwater entering local sewer systems, which led the state to impose a Consent Order and Agreement in 2012.

With expensive decisions on the line, the DEP encouraged both to switch to a regional approach for managing their wastewater systems instead of rebuilding two sewer plants.

“Both Montgomery and Muncy Boroughs and two surrounding townships—Clinton and Muncy Creek—came together to form the West Branch Regional Authority, combining our efforts to get rid of the two existing sewer plants and build one big plant that would serve us all,” says the Authority’s deputy executive director, John Lynch. “When we started, there were just four of us, but we’re now a team of 30 with a variety of responsibilities.”

Building a brand new plant was a crucial step in addressing the issues, but there was a lot more to be done, says Lynch. 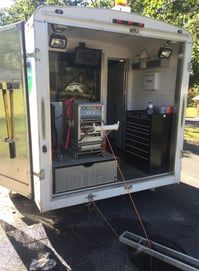 The Authority needed to develop and implement a preventative maintenance plan, including cleaning and inspecting all of its lines to get a better understanding of the rehab and repair needs. But first, it needed equipment to do so.

“A&H Equipment Company came up and did a great job demonstrating the sewer inspection camera crawlers available, and we decided to go with the ROVVER X,” Lynch says. “It was a great choice. We’ve been happy with it ever since.”

The Authority also purchased the Verisight Pro+ push camera to assist in their inspection efforts, as well as several vac trucks from A&H for jetting and cleaning.

Growing with the Area

Today, the Authority manages 61 miles of mostly gravity sewer lines, with 12 lift stations and several force mains to move wastewater to the centralized plant. Wastewater from two service areas actually runs under the Susquehanna River to the plant. 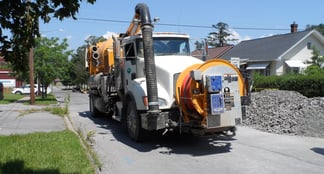 “The region we serve continues to grow each year,” says Lynch. “We just extended four miles of sewer line and every year we’re doing extensions and branching out.”

With some major progress made in recent years to bring the region of Lycoming County up to standards, the Authority is now ready to shift more focus to one specific part of its system: laterals. 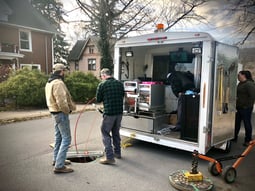 “We perform lateral inspections from inside the homes, which we currently use our push camera for, but a lot of the time we can’t get into the resident’s house because they are at work or out elsewhere,” Lynch says. “It prompted us to look into our options and we’ve decided to trade in our ROVVER X for the new ROVVER X SAT II lateral launch crawler.”

The Authority is just a week away from the delivery and training for the new system.

“We’re planning to start performing a lot of lateral inspections from the main which will help us tremendously,” Lynch says. “That way we can directly show homeowners the condition of their laterals and what needs to be done if there are issues.”

Security in the Equipment

West Branch Regional Authority has relied on the ROVVER X sewer crawler for the past 8 years, inspecting every mile of pipe in its system to get a clear understanding of its condition. 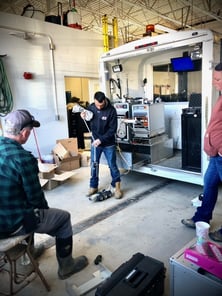 “The ROVVER X has been a great piece of equipment for us,” Lynch says. “It’s allowed us to really see what’s going on and make more informed decisions. It’s also helped us address some unique challenges, including finally locating 8 manholes across a farm field that were buried 5 feet deep. It showed us where everything was, we dug them up and we were able to raise them back up to where they were supposed to be. It wouldn’t have been possible without the camera.”

Having local support from A&H Equipment Company and Envirosight has helped the Authority tremendously over the years as it rolled out a new preventative maintenance program, Lynch says.

“We’ve had a really positive experience with Envirosight and we have a great ongoing partnership with A&H,” he says. “We’re looking forward to getting to work with our brand new lateral launch crawler and taking our inspection efforts to the next level.”