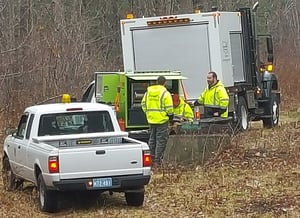 Versatile equipment proves its worth when a wastewater team has to do double duty. “With the new equipment, we were the best tooled crew in the Public Works division, and in a small town everything has to serve four or five purposes,” says Legg. The wastewater crew is often called in to investigate stormwater and drainage lines. “Some lines are 100 to 200 years old, and you never knew what to expect,” says Legg. “The pipe material could change eight times in a run, or you could pop up in someone’s basement. Some were lines that just had dirt thrown over them and now run under someone’s lawn.” 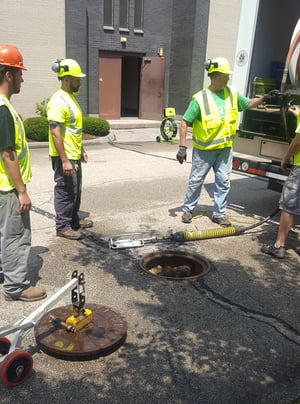 When sewer lines required jetting, the crew had previously been hesitant to run a nozzle blind, not willing to risk catching it on an obstruction or damaging it. With their newly purchased Jetscan video nozzle, they get a better idea of what they’re up against. “We run the Jetscan up the line and when we feel it hit something we can bring it back and see what it is,” says Legg. “Then we pick the best nozzle for the challenge.”

As with any wastewater division, Legg and his crew occasionally encountered frustrated customers complaining of blockages. Using the Verisight with a locator wand, the crew can troubleshoot quickly. “We can pinpoint the location of a blockage and even how deep it is,” Legg says. “Then when it’s the customer’s responsibility, they can give their contractor the exact coordinates and avoid having their entire lawn dug up. It's put a dead stop to the arguing.”

Many sewer utilities struggle with EPA regulations relating to the Clean Water Act. “We had a lot of work we needed to do to meet EPA requirements and now we’re able to do it,” says Legg. “Our wastewater treatment plant was always great. We even won an award from the EPA. The collection system is where we struggled.” With the ROVVER X crawler and other Envirosight equipment, the crew is able to inspect, clean and repair their collection and stormwater systems effectively. They have moved from being reactive to being proactive.

One of the biggest problems facing Uxbridge before purchasing their new equipment was the inability to effectively understand their sewer infrastructure. This left them unsure of the assets they had and the condition of those assets, frustrating the wastewater crew, contractors and customers. “We never knew what we had underground,” says Legg. “With the new equipment, what was inaccessible has become accessible.”