In July 2021, Brad Richardson and Travis Johnson were on the hunt for a CCTV inspection camera system to help the pair kickstart the new environmental branch of Richardson’s contracting business.

“When we started looking for cameras, I came across [someone else’s] first,” Johnson explains. “We called their sales guy and spoke with him once. But after that, try as we might, we couldn’t get back in touch with him. That’s when Reed Davis [of Infrastructure Solutions Group] reached out to us. We talked with him until we had the Envirosight camera in our hands.”

“And,” he added, “we finally heard back from the competitor this past spring.”

Brad Richardson, owner of Richardson & Richardson, Inc., has worked in the water and wastewater industries since the mid-1990s. Last year, the Myrtle Beach, SC-based contractor saw that there was unmet demand for sewer inspection and point repair services in its area. Richardson reached out to Johnson and suggested that the two team up to seize this opportunity. While Johnson was new to the world of wastewater, having worked in the power industry for over two decades, he jumped in headfirst. 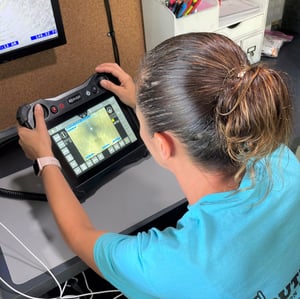 “When we started out, it was just me and a couple of Brad’s guys and the camera,” Johnson says. “My wife, Christy, started helping us with cleaning and inspecting a little later on.”

Richardson’s market insights proved accurate; increased housing demand in the Myrtle Beach area has created an opportunity for the environmental division to thrive.

“The bulk of our work right now is inspecting lines for private contractors that are getting new subdivisions ready for tenants,” Johnson says.

Right off the bat, SEUS also scored some large projects. “We did our very first point repair job behind the House of Blues in Myrtle Beach,” Johnson notes. “Then we did a project in downtown Charleston.”

Later, the contractor inspected lines underneath a local highway as part of an expansion project. 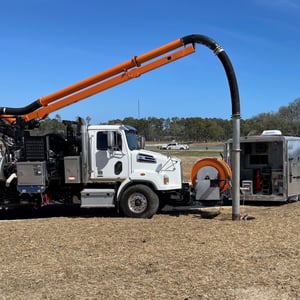 After early successes, SEUS invested in a Vactor 2100i combination sewer cleaner, an operator to run the Vactor, and a 7x14 Honda inspection trailer fitted with Envirosight equipment. To date, the contractor has also taken delivery of a Verisight Pro+ push camera and three different-sized packers to install Quick-Lock rehab sleeves from Pipeline Renewal Technologies.

SEUS’s ROVVER X has made the crew’s inspection jobs easier, aiding in the contractor’s rapid expansion.

“I like that ROVVER X isn’t as big and bulky as the other inspection systems,” Johnson says. “The compact size and the way it’s engineered makes it easier to use. Plus, it’s quick to change out the wheels—it’s really user friendly.”

The crawler’s compact size has been especially helpful when dealing with the effects of coastal weather events. 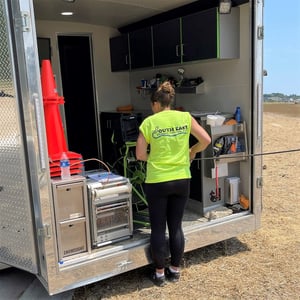 “There was some major rain this past July,” Johnson explains. “Some older subdivisions from the 70s and 80s flooded and had four inches of water in them. The owner couldn’t even tell if their lines had ever been cleaned or not. We went in with ROVVER X and saw that there was so much root infiltration that we had to get a root cutter. … The crawler made it through 8–10-inch pipes with 6-8 inches of silt in them.”

But come rain or shine, one thing has stayed constant: Reed Davis and ISG have been by the crew’s side through it all.

“Reed has been a great help to us,” Johnson says. “We’ve gotten to be personal friends with him. At first, I was surprised by how involved he is! He’s always on the spot when we need him.”