The Challenge of Treating Fracking Wastewater

While the drilling technology used to gather oil and natural gas from deep underground—commonly known as fracking—has been a popular practice for years, its impact on communities has come to light slowly.

Fracking is the process of injecting water and chemicals deep into the earth at extreme pressure, breaking up layers of rock to release natural gas and oil. As the practice of fracking has boomed across at least 20 states in the U.S., it has helped increase domestic fuel supplies and reduce Americans’ dependence on coal and foreign oil. 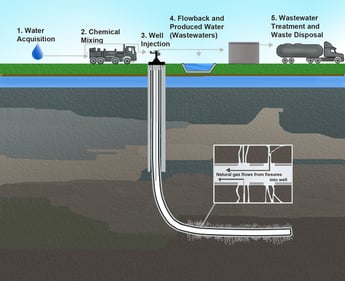 However, some communities have found that the practice, if under-regulated, can pose a threat to public drinking water supplies, including private wells and rivers in highly populated areas. Like all mining, fracking produces waste, and that waste is then sent to landfills and other disposal facilities. Water that percolates through landfill waste and gets collected for disposal is known as leachate. Landfill leachate that is a byproduct of fracking for oil and gas has been found to contain high levels of ammonia and other chemicals, as well as radionuclides radium-226 and radium-228—radioactive substances found in nature.

But even though rules to protect communities against radioactive waste have become more stringent, a number of sewage treatment plants across the country have been accepting more landfill leachate than permitted. During the wastewater treatment process, the radioactive elements would not be removed, and thus the leachate may make its way back into rivers and other bodies of water with public exposure.

Exposure to higher levels of radium over a long period of time is believed to lead to health problems in humans, including cancer, anemia, fractured teeth and cataracts.

And exposure to radioactive elements poses a threat to more than just people in surrounding communities, but also to the plants, fish and other wildlife native to the affected waterways.

Without federal hazardous waste rules, radioactive contamination in water systems may not be regulated by plant operators or state officials as closely as it should be, some argue.

While treating and discharging fracking wastewater is generally regulated under the federal Clean Water Act, that law allows federally approved state agencies to administer its standards and empowers states to enact their own requirements. On the other hand, the regulation of recycling fracking wastewater is generally left to the individual state. This can leave room for some disparity across regions, as states are responsible for determining their own requirements and enforcing them. Regulation of the handling, storing and transportation of fracking wastewater is also left to individual states, and rules can vary widely.

In the U.S., five states have banned fracking. In California, Colorado, New Mexico and others, the efforts to ban or restrict hydraulic fracking have fallen to the city level and have been implemented in local capacities, rather than state-wide. Other states, including Pennsylvania and Ohio, have passed laws to limit municipalities from using zoning to protect citizens from exposure.

The EPA has worked to better understand the effects of non-traditional oil and natural gas development in recent years, including how to ensure a safer management of wastewater and stormwater. But in the meantime, many communities still feel it’s not being enforced, or regulated, well enough.

Alternative practices for treating fracking wastewater have been introduced in the industry to address the issue of contamination. Advanced oxidation, chemical treatments that work to eliminate the organic compounds in wastewater, and reverse osmosis, pushing wastewater through a membrane to clean it, are among the technologies being used in some wastewater treatment systems today.

A third trend is modular treatment systems instead of centralized treatment technologies. This concept may help decrease treatment costs and transportation needs, while also allowing for more flexibility for treating contaminated wastewater in different areas. Moreover, it would work to address the overflow issues some treatment facilities are facing when handling fracking wastewater.

To ensure fracking leachate is not affecting your wastewater system, you can take a number of steps, including closely monitoring the waste you’re taking in and what contaminates may be present; testing for those contaminants; and communicating with downstream facilities, as well as the overseeing boards and organizations.

With a proper understanding of the potential consequences of fracking wastewater when rules are not followed closely, the drilling technology can continue to be utilized successfully without negatively impacting the water supplies in surrounding communities long-term.