The first day that the Tele-Vac Environmental crew took its new ROVVER X SAT II out in the field, they were scheduled to inspect for the Metropolitan Sewer District of Greater Cincinnati (MSD).

“The host pipe was 54 or 56 inch, and we were supposed to shoot a lateral,” recalls Anthony “TJ” Arbino, project manager for the Ohio-based sewer services contractor. “We got there, and it wasn’t a lateral, it was a 12-inch pipe. We launched that anyway, and we were able to go 90 feet into the line. 90 feet! The pushing power and capabilities were amazing—to go so far up an uncleaned pipe with a lateral head.”

Lateral inspection is only one of the sewer services offered by Tele-Vac Environmental. Since its founding in 1991, the company has made an effort to stick with the times, investing in new equipment and adapting its services to meet evolving industry needs.

When Joe McCauley, son of one of the original founders, became CEO and president, he carried on that tradition. As a result, Tele-Vac has grown to over 100 employees operating across the Midwest, Alabama, Mississippi, Georgia and the Carolinas. It’s become a one-stop shop for sewer maintenance, rehab and inspection, with offerings ranging from manhole-to-manhole relining to hydroexcavation. And they were an early entrant into the market for cross bore inspection for new gas lines. 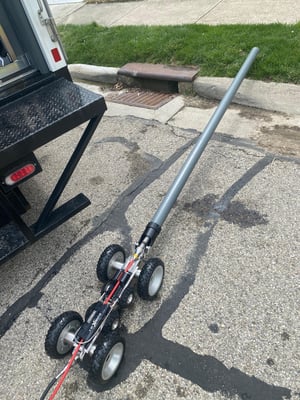 Until recently, the company had relied exclusively on a competitor’s CCTV and manual launch options for lateral inspection. “But we stay on top by getting the sharpest tools in the toolbox,” explains McCauley. “Instead of staying stagnant and comfortable, we look to see if there are better products out there.” He first got a good look at the SAT II while in Florida, and like many new customers, was smitten by the quick-release wheel change. “How many times have we lost the little bolt on the wheels for our older system?”

If investing in a new brand of equipment felt like a risk, any concerns were short lived. Training the Tele-Vac team on the system has been effortless, for both first-time CCTV operators and experienced workers.

“It takes two people to do what used to take four or six,” says TJ. “And that truck has let us take on work with MSD that normally they wouldn’t give us. It’s opened up a new avenue.” Plus, he adds, “Now we can go into buildings you can’t get a truck in, and it’s all very portable.”

Technology That “Works for You”

The ROVVER X SAT II can inspect 80-inch pipe, but according to TJ, “The large pipe capability is just the tip of the iceberg.” The crawler’s turning, lighting and rapid launch have all made daily inspection work smoother and faster.

And the interface is like no other. "The command center is just lightyears ahead [of our other crawlers’],” says TJ.

“It’s like sitting in a jet fighter cockpit versus a Volkswagen. It’s impressive to look at—the larger screen, the aluminum controls—but it’s the functionality too. They’ve thought about a lot of stuff in there. Useful stuff, not features that are just there to be there.

“You can customize the controls, and change profiles. If you go on a job that needs certain profiles, they’re available at the touch of a button. On a different job the next day? You pick another profile. It works for you.”

The team at BEST Equipment, Envirosight’s exclusive sales partner in the region, has been an added bonus. “They have a real winner set of people there [at BEST], and it makes a lot of stuff smoother,” says TJ. “It’s not often you get someone to call you unless there’s an issue after the sell, but George Luce calls almost every month to check and see how things are. It goes a very long way.”

It’s a relationship that will serve them as they continue to grow with the industry. Because as McCauley says, “We’re not slowing down anytime soon.”

Ready to see how the ROVVER X SAT II can increase your productivity and expand your offerings? Schedule a free demo with one of our experts.