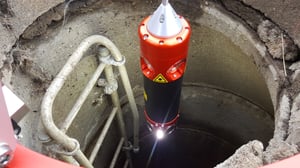 Robert Korosec, PLS, is cofounder of Utica, NY-based Subsurface Utility Imaging (SUI), a company dedicated to location and inspection of underground infrastructure assets since 2010. As such, he’s been actively using and researching new pipeline and manhole inspection solutions on behalf of many municipal clients. “Cities don’t have money, and their infrastructure is unreliable,” he says plainly. “Anything we can do that makes sewer maintenance more cost-effective is useful and appreciated.”

In 2017, SUI was engaged to inspect the pipelines and 300 manholes of a municipal sewer system. CCTV and smoke testing were used for the pipelines, but Korosec saw an opportunity to try something more innovative for the manholes. “We were offered the use of a system that uses automation and photo capture technology to gather high resolution images and 3D point clouds of manholes,” he explains. “Given the large amount of manholes on this project, and their poor condition, I felt we had to give it a try.”

With minimal training, SUI crews were able to put the system to work immediately, inspecting an average of 50 manholes a day and completing the manhole inspection portion of the contract in less than a week. “One thing we liked about this system was how compact and light it is,” says Korosec. “One person could move it around and set it up easily, in a small truck—that made a big difference.”

Comparing the project costs of manhole inspection to pipeline inspection is instructive. Of the $43,000 total cost,

Moreover, manhole inspection found far more I&I sources. “The pipelines here were in pretty good shape, and we estimate were only contributing five to ten percent of total I&I,” says Korosec. “The manholes were a different story—the client suspected issues, and they were right. About half had issues related to faulty mastic barriers or missing brick mortar, and we were absolutely spotting many problems, from leaks to gushers, that a simpler system would have missed.”

This means that just $17,000 was spent to identify up to 90% of the I&I sources in this municipal network. And all of the manhole I&I sources found are easily fixed, compared to pipeline I&I. “Access issues alone make manholes easier to address—relining a section of pipe is more expensive than fixing the two manholes at either end,” Korosec points out. “The city has been prioritizing manholes for rehabilitation based on the inspection data we provided.”

3D data was not a contract requirement on this project, but SUI provided it anyway. “The software on this system made it easy to generate 3D information with just a couple of clicks, so we sent it along,” Korosec says. “They didn’t perceive a need at this time, but they may in the future. And we already know that engineers and cities with their own engineering departments are interested in 3D information.”

SUI liked the system so much that they recently purchased it for themselves. Size and price were major factors in their decision. “The portability was important—it gives us the flexibility to send it out in any of our vehicles. And price of course—this system’s technology came at a reasonable cost.” He added, “Excess I&I is such a big problem for cities around here, and the regulatory environment is difficult. And of course, treating clear water is a huge extra cost for taxpayers. We learned that really good manhole inspection is a very practical and efficient way to help cities address these issues, and we want to provide that service."

This customer spotlight is an excerpt from Rethinking Manhole Inspection, an Envirosight white paper. To learn more about how manhole inspection can reduce I&I quickly and cost-effectively, download the entire paper now: