Sewer School: What Is Sewer Slope, and Why Does It Matter?

The vast majority of sewer systems are built to take advantage of gravity, with sewer lines sloping downward to convey waste to a treatment plant. Although lift stations and force mains can be used when water must be moved uphill, slope is a critical consideration for the design and maintenance of a sewer system.

Sewer slope, also known as pitch, keeps liquids and solids moving at an appropriate speed in a gravity system; pipes must slope downhill to drain properly. If the slope is not steep enough, the sewage slows down, resulting in clogs. If it’s too steep, water and solids can separate, causing solids to accumulate in the pipe. 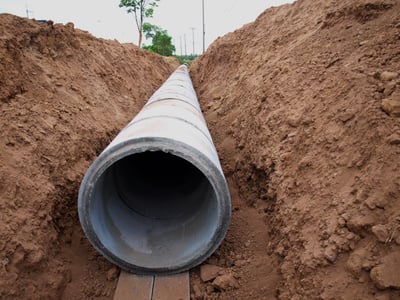 What Is an Appropriate Sewer Slope?

Regional guidelines often specify that the slope of the sewer should follow the slope of the land above as closely as possible, as long as that slope produces sufficient flow and velocity. Deviating too far from the slope of the ground can cause the sewer to be too shallow for adequate cover or too deep for safe, affordable construction.

Across the U.S., the Manning Formula is the most common way of calculating the required sewer slope for simpler systems. It takes into account the hydraulic radius (for circular pipes flowing full, this is the pipe diameter divided by four); the average water velocity; and the Manning coefficient, which is a number that reflects the friction applied to flow by the pipe (and which varies by material used).

Larger pipes require less pitch, as their size allows effluent to flow more easily. For example, using a Manning coefficient of 0.013 (which is often used with concrete or mortar cement pipes), a pipe with an 8-inch diameter should have a minimum of 0.54 feet (about 6.5 inches) in slope per 100 feet. In other words, for every 100 feet the pipe travels horizontally, it should drop about half a foot vertically. A pipe with a 30-inch diameter should have a minimum of 0.06 feet (less than three-fourths of an inch) in slope per 100 feet.

A key advantage of using the Manning Formula is its simplicity, but its accuracy decreases somewhat as the diameter of the pipe increases, because the formula was originally created with a limited data set that included mostly smaller pipes.

For more complex systems, engineers can use computer programs that account for additional variables.

In many areas, regional regulations dictate how gravity sewers are designed and constructed. These guidelines help prevent a variety of problems, including those that can affect slope. Among the most common are Because gravity systems rely on downward-sloping pipes, a variety of problems can result when the pitch is not appropriate for the conditions.

A wastewater system is a significant investment for a community—and one that requires ongoing oversight. Routine inspection enables municipalities to determine current conditions, including slope, and plan maintenance.

Sewer professionals have a few tools at their disposal to monitor and assess the slope of a sewer line, including empirical measurement, laser profiling, anecdotal evidence, and flow meter data. 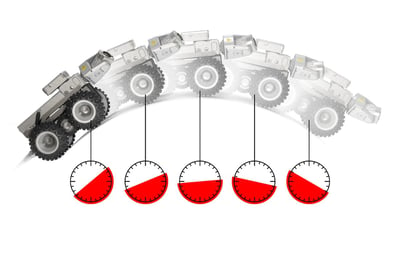 Slope can be calculated as the difference in elevation at each end of the pipe divided by the horizontal length of the pipe. A sewer inspection crawler outfitted with an inclinometer can measure how the slope of a line changes over distance, revealing a pipe's bellies, offsets and other features that can collect sediment and impede flow. Software such as WinCan can be used to plot the results as a grade profile.

Laser scans generate 3D data that can be analyzed to understand pipe ovality and other geometric anomalies resulting from slope problems.

Observations of flow lines, pooling, debris accumulation and more can be a warning sign that the slope of a sewer line is insufficient.

Areas of low or excessive velocity can indicate that the slope is incorrect.

Slope also affects how often sewers must be cleaned. Most communities and municipalities try to schedule a cleaning of the complete system every one to two years. While the frequency of cleaning is also driven by the size of the pipes and their condition (e.g., whether any sections are subject to penetration by roots or prone to blockages), slope is a key factor. Sewer lines that change slope from steep to flat are more prone to grease buildup, for example.

A properly designed, operated and maintained sewer system can last for decades—40 to 50 years for wastewater treatment plants and 50 to 100 for wastewater pipes. Proper slope plays a critical role in that longevity. Learn more about how an increasing number of sewer pros are leveraging ROVVER X to obtain accurate, detailed information on pipe slope.