When sewer systems work, they’re largely invisible to the public. Wastewater flows, unseen, through pipes from homes, businesses and industries to treatment plants, where it is cleaned and returned to the environment.

But standing pools of water and foul odor—signs a sewer is not functioning properly—are increasingly common.

Many of our sewer systems were built a century ago, when corrosion management solutions and techniques were limited. These are nearing the end of their useful lives, primarily due to corrosion. In fact, corrosion is one of the biggest issues facing underground infrastructure, according to NACE International. 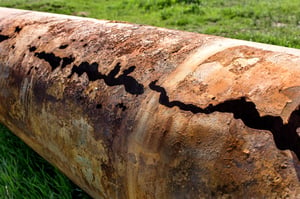 Why Sewer Erosion and Corrosion Matter

Corrosion is a particularly dangerous and costly form of pipe decay: Like cracks and breaks, it can degrade the structural integrity of a pipe and cause wastewater to leak into groundwater or waterways via exfiltration, potentially sickening people and harming the environment. New, dangerous substances can also enter the flow, and corrosive microbes and bacteria within lines can release toxic gases. Corrosion costs American drinking water and sewer utilities $80 billion per year.

Many factors contribute to corrosion-induced sewer system breaks, including soil conditions, seasonal temperature change and seismic action. Corrosion itself comes in a variety of forms, including uniform attack, pitting, galvanic corrosion and selective leaching. Erosion occurs when effluent running along a line wears away at the material, leaving grooves, rounded holes, gullies and general flow patterns. In many cases, failures caused by erosion occur in a relatively short period of time, according to NACE.

In the wastewater industry, corrosion is often intensified by microbes, in a process known as microbially induced corrosion, or MIC. Bacteria collect in pipes and treatment plants and produce hydrogen sulfide, a toxic, flammable, smelly, and corrosive gas. A chemical reaction transforms this into sulfuric acid, which eats away aggressively at concrete pipes. In addition, hydrogen sulfide endangers workers and the public: Exposure to this toxic gas can irritate the eyes and skin, cause difficulty breathing, and lead to coma or even death.

How to Remedy Corrosion

There’s a “staggering” maintenance deficit in the wastewater industry, according to the 2021 Report Card for America’s Infrastructure, but your wastewater system doesn’t have to fall victim to corrosion. While there are many methods for addressing corrosion, the most effective is prevention. Regularly inspecting lines can help identify pipes in danger of corrosion, so you can take action before damage or a breakage occurs.

Verisight Pro+ pairs smart technology with the classic, rugged push camera to quickly troubleshoot corrosion and other sources of infiltration. Schedule a demo to learn more: