In the early 2000s, Mark James settled down with his wife in the City of Redmond, OR. James and his wife were quickly taken by the area’s small-town charm. And they weren’t alone—from 2000 to 2006, Redmond’s population grew by a whopping 74%. The town became a bonafide city, but it’s held onto its tight-knit community values over the years. 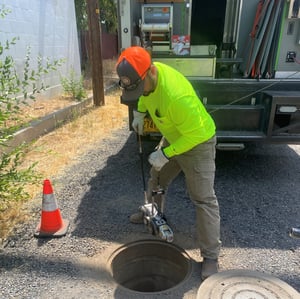 With the population boom came construction, and accompanying underground infrastructure. The City’s Wastewater & Stormwater Division, where James is lead collections operator, had its hands full. The wastewater crew reached their limit in 2017, when they found themselves sending their inspection crawler out for repairs time and time again. The 15-year-old system was outdated and clunky, and lacked steering abilities. The crew went on the hunt for an upgrade, demoing several models, including Envirosight’s ROVVER X sewer inspection crawler.

Out of all the crawler options, “We liked what Envirosight had to offer most,” said James. “It felt like they kept up with the times more than the other companies we looked at.” Redmond quickly purchased a unit.

In the years since, ROVVER X’s steerable six-wheel drive has confirmed that they made the right choice. James explained, “We’re able to get more done with the ROVVER because of the steering capability. We can set up in one spot and move it in any direction, so we get more done than we did with our old equipment. Plus it’s lighter, so it’s more ergonomic coming in and out of manholes.” 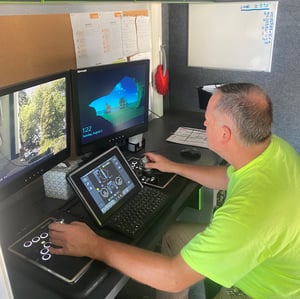 The Division also invested in a Verisight Pro+ push camera, which is used for maintenance work on an everyday basis. “We’ll even use it on City Hall,” James said. “A lot of other departments ask us for our help.”

Today, Redmond’s landscape continues to evolve. Whenever a new subdivision is built, the Division uses ROVVER X to inspect the area’s sewer lines before the new residents move in.

“Just after buying the ROVVER, there was a new subdivision going in, and they had to do blasting work for it,” James says. “The excavation caused a sewer backup in a 24” interceptor line, so we went out with the camera to check it out. It got in there and climbed over mounds of debris like it was nothing.”

The Division’s also gotten creative with how it utilizes ROVVER X. “We attached a rod with a steel ball to the crawler that drags through the pipe,” James explains. “Now, any time that ball goes underwater we know we’ve found a sag.” 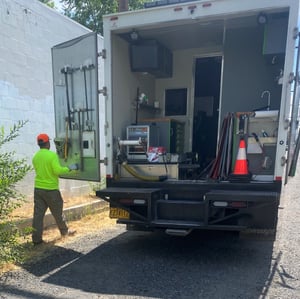 And the crew’s used ROVVER X for more than just inspections. For several years the Division hosted groups from local schools, building connections with the community.

“We would set ROVVER X up for tours,” James says. “When kids would come to the Division, they liked to try it out and see themselves driving it on ‘TV’. Quite a few school kids have used it.”

Redmond’s population continues to climb, but the Division can keep up knowing it has the necessary tools to accommodate new growth.

Ready to see how ROVVER X can help your city handle growth and construction? Request a free demo with one of our pros today.