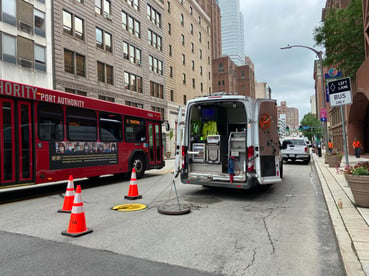 “We are constantly trying to climb hills with our equipment, which we used to find really difficult,” says Jason Auge, CCTV specialist and 13-year-veteran of PWSA. “Since purchasing the SAT II systems, we are doing it effortlessly.”

The Authority, established in 1984, is responsible for the entire city of Pittsburgh’s sewer system, roughly 12,000 miles of mostly combined sanitary and storm sewer lines. And there is no shortage of slopes around the historic city, Auge says.

“The biggest differences we’ve noticed with this system are the improved climbing capability and push power,” he says. “With 8-wheel drive instead of six and the new belt drive, it’s made a big difference.”

PWSA faces several other challenges in the city’s system, including increased debris due to the combined system, frequent pipe junctions and sinkholes. 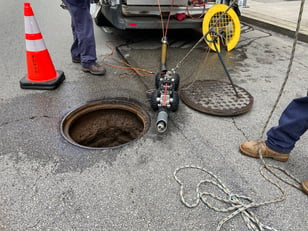 “The number of lines that run junction to junction in our system is a unique challenge for us,” Auge says. “There is often no manhole to gain access, but with the lateral launch on the SAT II, we are able to drive up one sewer main and launch the camera into other mains running perpendicular. And using the carbon fiber antenna for the camera head, I’m able to lift over a lot of joints and steer through junctions that I wasn’t able to before.”

Operators rely on the launch camera’s pan/tilt capabilities to investigate defects and navigate through bends. And twin sonde transmitters make the crawler and lateral launch camera locatable from street level for accurate marking and digging. 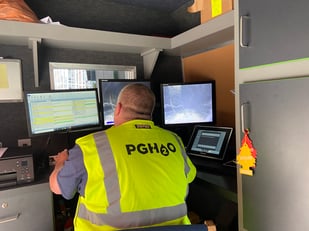 The new system has also proven to be a useful tool in determining the source of sinkholes and resolving them faster.

“We first do dye tests on the sinkhole to determine where the issue is coming from, whether it’s the main or the lateral,” Auge says. “If we find it’s the lateral, we confirm which home it’s coming from and then we launch the SAT II up their line and determine what’s broken and what they need to do to repair it. The push power going up these laterals is way better than before, so we’re addressing needs really quickly.”

The SAT II’s new push drive mechanism offers increased power while minimizing wear on the push rod. And it’s designed for easy cleaning and toolless belt changes in the field.

With a SAT II system in each of its three inspection vehicles, PWSA has already seen an improvement in productivity.

“There’s definitely been an increase in efficiency with the SAT II,” says Auge. “We are getting more done. It’s crawling faster and we’re getting to our problem spots quicker. It’s clear the technology has improved significantly.”

A long-time customer of Envirosight, PWSA has relied on sales partner A&H Equipment Company for many years of equipment support and service. 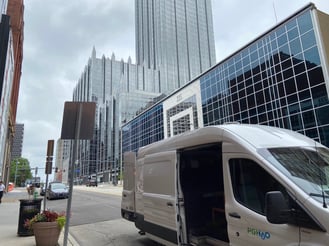 “The team at A&H is great,” Auge says. “Anytime I need something, they’re quick to get me fixed up and answer any questions I have. They helped us get up and running with this new equipment right away and we are really happy with its performance.”

And the A&H crew echoes the positive sentiment—pleased to see its loyal customer satisfied with the new equipment right out of the gate.

“More than most cities, Pittsburgh has some really challenging sewer infrastructure," says Perry Ohm, territory sales manager at A&H. "PWSA has long trusted Envirosight equipment for its versatility, ruggedness and reliability. We were really excited to get the new ROVVER X SAT II into their hands—we knew if it impressed them, it would succeed anywhere.”