Celebrating 75 years of service in 2020, Ironhouse Sanitary District has a rich history in the eastern San Francisco Bay Area. Over the years, the District has watched small communities turn into incorporated cities, added nearby communities to its own service area, and seen substantial growth across the region.

It’s been a lot of change and adaptation, but having a loyal, hardworking team and dependable equipment has served the District and its community well.

“We follow our sewer system management plan pretty strictly so we can properly manage, operate and maintain all parts of our sewer system and mitigate risks like sanitary sewer overflows (SSOs),” says Ian Robertson, the District’s CCTV operator. “In the fall of 2019 we decided to start looking into more efficient sewer inspection equipment to keep up with the growing demand.” 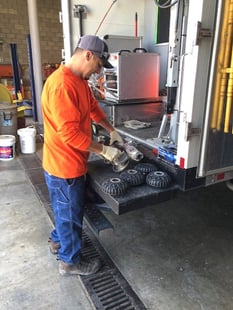 “The process was absolutely amazing,” Robertson says. “I got in the truck and within one hour I felt really comfortable operating it by myself.”

The District now owns an inspection truck based on a Ford E-450 chassis and equipped with the ROVVER X crawler system, the ROVVER X SAT lateral launch crawler, and the RX95 small-diameter crawler.

“This truck compared to what we were using, it’s just night and day,” Robertson says. “Previously, we needed tools to take apart the camera—to change the wheels or change the setup. What would take at least 10 minutes to change before, takes less than two now. It’s definitely made things easier for us. I absolutely love it.”

Growing With the Region

Ironhouse Sanitary District, formerly called the Oakley Sanitary District, has been providing service to the community since 1945—getting its name from a local schoolhouse in 1992. The District services a population of 44,000 across the City of Oakley and Bethel Island, with 128 miles of gravity pipe ranging from 6-30”, 18 miles of force mains from 4-14”, and 32 pump stations.

“Oakley is one of California’s youngest cities, becoming a city in 1999, and it’s growing immensely,” Robertson says. “Currently, we are performing about 25 new construction lateral inspections a month, but some months that number can be as high as 40.

"The SAT system has been great for inspecting for I&I when needed. It’s very convenient to have the sonde when you launch the lateral. You can just walk right up to it, you know where it is, you’re confident in your mark, and we absolutely love that.”

The small-diameter crawler has also come into play in pipe sections where a standard crawler body size wouldn’t fit, he says.

“We have six-inch ductile iron pipe in some places and it gets a bit corroded,” Robertson says. “Even after cleaning it you can’t fit a six-inch camera setup through, so we put that little guy in there and it’s absolutely amazing the work that it does for us.”

While most of the District’s wastewater system is pretty straightforward, there are some occasional inspection challenges they’ve encountered.

“On Bethel Island there are some sewer lines and manholes that are very difficult to access,” Robertson says. “We ran across a situation where we had to set up 400 feet upstream of a manhole because it was in somebody’s backyard. At that manhole, the line did a hard 90-degree turn and it ran through an easement in their backyard. We went the 400 feet with the ROVVER X and once I saw the 90-degree bend, I thought ‘Okay, I’m going to put the camera through it because I have a lot of confidence that I can get through and not get stuck.’ It went through with ease and we actually went another 120 feet—there were no problems whatsoever.”

Keeping Up With Demand

Since upgrading its inspection truck and cameras, the District has seen a big boost in productivity—which is crucial for a department expecting continuous growth in the coming years.

“We have definitely been able to work more productively with the Envirosight setup,” Robertson says. “It takes 30 seconds to change wheels, it takes a minute to put the elevator system on, the camera is so much cleaner, the lens doesn’t get as foggy, and the video is clearer. Everything is just 100% better with this truck.

“We do a lot of mainline inspections with the ROVVER X and it lets us survey lines with ease. Connecting the elevator lift to inspect trunk lines is just so simple and convenient. With that crawler, if there is gravel in the way or something, it will run right over it no problem.”

And the local support from U-Rock has been a great bonus, too, he says.

“When we needed camera service, [account manager] Mark Paduveris showed up the very next day to pick it up, have it repaired, and returned it within a couple of days,” Robertson says. “That’s been a great benefit and has really helped us avoid downtime."

To learn more about the ROVVER X sewer inspection crawler, or test drive it yourself, schedule a free on-site demo today: