Is Wastewater a Pathway for Microplastics? 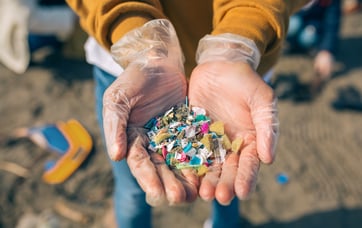 For many years, countries across the world have been working to decrease or eliminate the myriad of plastic polluting freshwater and natural ecosystems. Its presence has raised concern over its potential impact on the health of both humans and animals, due to chemicals and bacteria making their way up the food chain.

Different steps have been taken to mitigate the problem, including prohibiting single-use plastic in some regions and increasing the use of biodegradable materials, but there’s more to the issue than large plastic bottles and grocery bags.

In identifying where the plastic is coming from, and its path to contaminating rivers, oceans, soils and various ecosystems, research has shown our wastewater systems may be more to blame than we realize.

Presence of Microplastics in Wastewater

Microplastics, defined as fragmented pieces of plastic measuring less than 5mm (less than a quarter of an inch) in length, often originate from items humans use on a daily basis, like toiletries and cosmetics. These particles make their way unnoticed into wastewater systems through sinks, toilets and showers, according to the United Nations Environment Programme (UNEP). Other sources include fibers from synthetic textiles from washing machines, car tires and various manufacturing processes, or the gradual breakdown of larger plastic items.

While the accumulation of macroplastics in the environment — larger materials such as food and beverage take-out containers — is concerning, microplastics’ size makes them particularly difficult to identify and contain.

Microplastics traveling from homes and businesses through a city’s wastewater system to a wastewater treatment plant are not being effectively filtered, and are thus being released back into the environment, according to some studies. 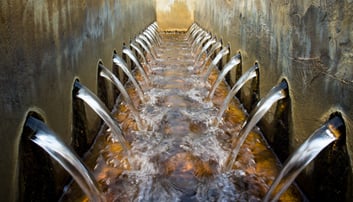 “Rivers are sources of drinking water for many communities and also a habitat for wildlife,” according to Timothy Hoellein, an assistant professor at Loyola University Chicago, in an article by the American Geophysical Union. “Fish and invertebrates eat the tiny pieces of plastic in rivers, which then make their way up the food chain—possibly ending up on our dinner plates. Like microplastics in the ocean, plastics found in rivers carry potentially harmful bacteria and other pollutants on their surfaces.”

Similar studies have come up with the same result, finding more microplastics in water downstream from a wastewater treatment plant than upstream from it.

"[Wastewater treatment plants] do a great job of doing what they are designed to do — which is treat waste for major pathogens and remove excess chemicals like carbon and nitrogen from the water that is released back into the river," according to Hoellein. "But they weren't designed to filter out these tiny particles."

While studies have proven that humans are ingesting microplastics, the specific impact on human and environmental health aren’t yet fully known, as research on the topic is still very much in the early days. Some researchers have pointed to a higher risk for certain diseases, like cancer and cardiovascular disease; neurotoxicity; autoimmune conditions; and reproductive and developmental complications.

The biggest concern lies in the physical and chemical properties of the plastic. 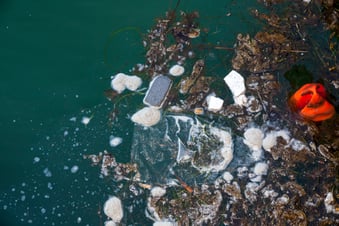 Several thousand additives are used in plastic production to provide specific properties, including plasticizers, pigments, antimicrobial agents, heat stabilizers, UV stabilizers, fillers, and flame retardants such as polybrominated diphenyl ethers (PBDEs), according to a study published in Current Environmental Health Reports. Microplastics in the ocean have also been found to develop persistent organic pollutants (POP), toxic chemicals that are resistant to environmental degradation and can be transported by wind and water.

“Given levels of seafood consumption worldwide, it is inevitable that humans are exposed to microplastics at some level,” the study claims. “Factors affecting retention and clearance rates are the size, shape, polymer type, and additive chemicals of microplastics ingested by humans. The severity of adverse effects resulting from exposures depends on the nature of the toxic chemical, exposure characteristics, individual susceptibility, and hazard controls.”

While there’s been increased attention and research directed toward this issue, there is no one-size-fits-all solution to eliminating the presence of microplastics in wastewater or ensuring they don’t make their way past treatment plants. Proposed solutions range from simply more education and campaigns on proper disposal of plastics to new legislation prohibiting synthetic fabrics and products that release large amounts of plastic microfibres, the most abundant type of microplastic.

“We need to design and adopt solutions able to limit the export of microplastics from cities and the landscape, protect water bodies from pollution loads, restore affected water ecosystems and minimize exposure to populations at risk,” says Josiane Nikiema, with the International Water Management Institute, as referenced by UNEP. “The treatment of wastewater and run-off and the safe management of sewage sludge are key milestones on the path towards achieving these outcomes. The adoption and implementation of these solutions must be supported by legislation, sound technologies, economic instruments, education and awareness that drive real change on the ground.”

Interested in learning about the basics of sewer inspection and maintenance? Request a free copy of Envirosight's Sewer Maintenance 101 guidebook to be mailed to your door.