How the Infrastructure Deal Affects Water and Wastewater

Boasting a new federal investment of $550 billion in American communities, the Bipartisan Infrastructure Deal recently passed by the senate is expected to boost the US economy by creating jobs and enhancing sustainability efforts. With new infrastructure ranging from interstate highways and electric buses to lead-free service lines and resilient water infrastructure, the deal is likely to affect nearly all municipal sectors. Its impact will be positively felt in communities for decades to come. In particular, the water and wastewater industries will benefit from historic clean water initiatives and significant infrastructure overhauls in areas of the country most impacted by floods and droughts. 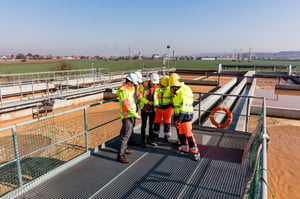 In 2020, communities across the US experienced nearly $100 billion in losses due to extreme weather-related disasters. Sewer systems and roadways were severely unfit to handle the flooding that took place during these events, and some municipalities have yet to fully recover from the damages. The new infrastructure deal will provide more than $50 billion to protect these communities from droughts and floods, allowing municipalities to build more resilient wastewater infrastructure. While part of these funds are allocated to general weatherization, the broad intent is to support protections against climate change-related events.

A Guarantee For Clean Drinking Water

It may be hard to believe, but many homes and schools across the United States don’t have access to clean drinking water. According to Whitehouse.gov, “Currently, up to 10 million American households and 400,000 schools and child care centers lack safe drinking water.” This means life-changing opportunities are on the way for millions, as $55 billion have been designated for the creation of clean water infrastructure. With dedicated funding to address the chemical PFAS (per- and polyfluoroalkyl substances), the plan is to replace every lead pipe and service line in the nation. This means more projects are on the way for contractors and municipal utilities responsible for inspecting, repairing and replacing water and sewer lines.

Furthermore, municipalities will have access to grants that will increase annually, with at least $25 million per year dedicated to “small and disadvantaged communities.” For instance, investments have been made to restore lakes and improve access to running water in tribal and Alaska Native communities, ensuring widespread access to safe, clean drinking water.

In spring 2021, the senate passed the Drinking Water and Wastewater Infrastructure Act of 2021. It began to address the essential infrastructure changes outlined in the Bipartisan Infrastructure Deal, such as grants for the replacement of lead pipes. But in addition to modernizing and weatherizing water and wastewater systems, the Act is the first-ever reauthorization of the Clean Water State Revolving Fund, which distributes $14.6 billion over five years. Likewise, it reauthorizes $2.4 billion for the Drinking Water State Revolving fund, which will increase annually up to $3.25 billion by 2025.

While the bill didn’t pack the punch of the more comprehensive Bipartisan Infrastructure Deal, it began to shoulder many of the same burdens. Overall, the bill authorized more than $35 billion in funding to municipalities across the United States, and paired with the new deal, municipal water and wastewater teams will have the renewed support from the federal government they need to thrive.

Interested in getting a piece of the pie? Envirosight’s free, downloadable guide to Municipal Grants for Water and Wastewater Systems can get you started in your search for funding.