This influx of soldiers caused Richland’s population to boom suddenly during World War II; by 1945 it had reached over 17,000 residents. Today, the City of Richland has a population of approximately 60,000. The City’s unique history means that its infrastructure, particularly its underground utilities, has proved challenging to maintain over the years.

"The race for that war, the nuclear drive was the factor for building in this area. They weren’t planning on keeping these homes or infrastructure around for this long, but we’re still maintaining it, so it’s a unique challenge," he continues.

Richland’s collection system was constructed haphazardly as soldiers, scientists and engineers—and their families—poured into the area. As a result, they navigate a particularly complicated network of easements and access challenges during day-to-day work. Some older residential areas utilize common sewer lines for their laterals, many of which lack manholes or raised cleanouts.

Moreno started working for the City in 2015, and has been supervisor for the last three years. He manages a team of 12 that oversees 300 miles of sewers and 150 miles of stormwater lines. The City’s utilities have their work cut out for them when it comes to their collection system.

“Our system is 70 years old in some areas—we have clay pipe and even Orangeburg pipe. Two years ago, we helped the water department with an old wooden line. We deal with the challenges of the whole collection system on a daily basis–and support other departments,” Moreno says.

The City’s wastewater and stormwater workers face a variety of unique problems, including two inverted siphons, with the infrastructure they oversee. Moreno’s solution to these difficulties? Research, new assessment equipment, and a renewed investment in his crew.

Because of the collection system’s antiquated pipe materials and advanced age, it’s often in need of repair. Moreno looked to older municipalities across the nation to learn how their teams dealt with aging infrastructure. This was particularly difficult because the City lacks neighboring communities that are comparable in age.

After researching management practices in Midwest and East Coast cities, it soon became clear to Moreno that “We needed to change the way we approached our work.”

Moreno decided to direct more of his team’s efforts towards proactive, preventative maintenance. However, he knew that the City needed more powerful inspection equipment to enact these changes. 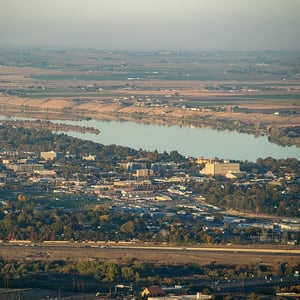 Enter Envirosight’s custom inspection vehicles. With help from Jim Brown of True North Equipment, Envirosight’s sales partner for the region, the City purchased a CCTV truck designed to support its utilities’ unique inspection needs. Equipped with a ROVVER X sewer inspection crawler, a Verisight Pro+ smart push camera, a spacious office and even a restroom, the truck provides the inspection crew with everything they could need for a day in the field.

Prior to investing in the new vehicle, the crews used a variety of assessment equipment, including an older ROVVER X model and several Envirosight Supervision crawlers.

Verisight is an essential part of the City’s inspection toolbox. With this push camera, the crew can get deep insights into hard-to-access areas in the collection system, including deteriorated and defective pipe.

Moreno’s been extremely pleased with how the new equipment has performed so far. “Now we have the right tools, the right crawlers to manage our system. The workers are thrilled with the new truck…It provides us with a clean slate.”

This “clean slate” also applies to the City’s employees themselves. In recent years, many of Moreno’s crew have reached retirement. In their place, Moreno has taken on the challenge of creating a cohesive unit with mostly freshman workers.

He estimates that on average, his crew members have worked for the City for only two years. But these newer members have played an integral role in reshaping the stormwater and wastewater crews for the better.

“There’s a bit of a learning curve,” for the newest employees in learning how to use the truck. But just a month into using the vehicle, the team is inspecting 1,500-3,000 feet per day.

“It’s a really unique challenge on a daily basis, dealing with the problems around here,” Moreno remarks. “Having the right equipment that runs consistently and delivers results is key, and that’s what we’ve had with Envirosight.”

Ready to raise your inspection game? Request a vehicle demo with one of our pros today.