Recognizing a demand in the region for wastewater and stormwater system services and a desire to venture out on his own, Scott Laney started Carolina’s Underground Services in March of 2020. 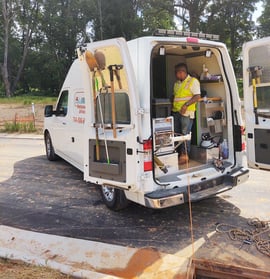 While Laney is new to the business-ownership world, he isn’t new to the industry, working on the product sales side since 2003.

The familiarity with equipment and the many customer experiences he’s been a part of led Laney to know exactly what technology he’d invest in when starting his own company.

Since opening in early 2020, Carolina’s Underground Services has purchased an Envirosight ROVVER X sewer inspection crawler outfitted in a customized inspection van, an Envirosight Verisight Pro+ push camera, and two Vactor trucks. Within the next five years, Laney hopes to have two more inspection vehicles—each equipped with the ROVVER X—and another Vactor truck.

“The best ability is availability,” says Laney. “When you know that you can just come out to the job site and turn everything on and it’s going to run perfectly, that’s a huge relief. That’s one less thing I have to worry about and the ROVVER X epitomizes that. It’s just very durable, easy to use, compact and the features are great. We love it. And the van build out is fantastic—they do a great job.”

Carolina’s Underground Services—which specializes in CCTV and cleaning for sewer and stormwater systems—takes on jobs in both North and South Carolina, with roughly 60% of its clients private and 40% municipalities.

“Right now most of our work involves clogged storm lines,” Laney says. “We’ve had a couple hurricanes and that’s really thrown people through a loop in the area. In general, the weather is a unique challenge for us with all of the flooding on the coast.”

However, the Envirosight equipment has quickly proven its dependability, even in the difficult climate, he says.

“By nature, the flooding brings in a lot of mud and sand at high tide and the ROVVER X just works right through it,” Laney says. “Nine times out of ten we don’t even have to change wheels. We can really rely on it and that’s not always the case with inspection equipment. I’ve been around customers previously with competitive products where it’s just been a nightmare for them.” 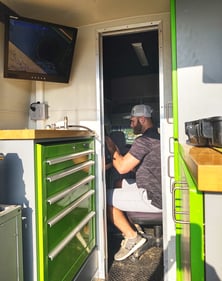 As Carolina’s Underground Services continues to grow, the team of five is taking steps to stand out in the industry and go above and beyond for its customers.

“I think our response time is one thing that really sets us apart,” Laney says. “We try to get to the job immediately, whenever possible. And the deliverable we supply clients with also helps us stand out. We send reports directly from the pendant and provide the inspection video through email and on a thumb drive so they can easily access it multiple ways.”

The company’s strong social media presence, handled by Laney himself, is also a unique practice for a smaller contractor in the industry. Carolina’s Underground Services consistently shares photos from out in the field with details about projects the crew is working on.

“It’s a great way to connect to others in the industry and to really show people the work we do and the equipment we’re using,” Laney says. “I’ve received several calls for work from new customers who found us just through our social media.”

As the team worked to hit the ground running over the past six months, knowing they had local support from Envirosight’s sales partner, Infrastructure Solutions Group (ISG), was an added bonus, Laney says.

“Reed Davis and the rest of the team at ISG are great,” he says. “I’ve known those guys forever and any time I call with a question or an issue, which is few and far between, it’s handled immediately. That local support is a big plus, especially as a new company getting started.”