A Brief History of Pipe Materials

Sewer systems have been around in one form or another for thousands of years. As technology advanced, pipeline materials have changed, improving durability and functionality. With all these developments over time, most utilities have to contend with multiple pipeline materials, each of which have different maintenance concerns and a different lifespan. 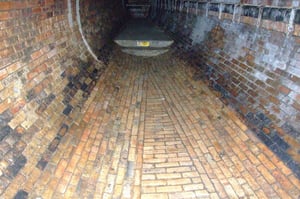 The first sewer pipes were constructed of brick and mortar in the Indus Valley in 2500 BC. Some of these systems, constructed by the Persians, Macedonians and Minoans, contained brick-lined pits similar to modern septic systems. Eventually, the Romans and Greeks built extensive, open sewer systems of brick and stone which carried effluent and trash to cesspools constructed of stone or concrete. Solids would then settle to the bottom and liquid would flow to nearby bodies of water. After the fall of the Roman Empire, Europe entered the Middle Ages and many of these sewer systems fell into disrepair as sanitation and cleanliness became less important.

It wasn’t until the beginning of the nineteenth century when urbanization created a larger disease issue that sanitation efforts picked up again. Sewer technology progressed rapidly over the next few decades with new pipe materials entering the market and new technologies changing the industry. Each of these new materials found popularity and success in different regions. The first waterworks in the United States was installed in Philadelphia in 1802. Many of these early systems were still built with brick and mortar. Lines had to be much larger to account for the rough interior and required more structural support. Over time, corrosive materials in the sewer also wore away mortar, leading cities to invest in other, newer materials. 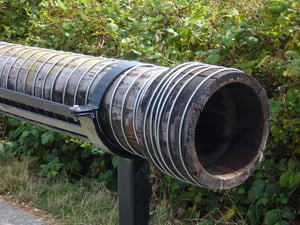 One of the new pipe materials to find popular use was wooden pipe. These pipes came in two styles: stave style, made by pressing beveled boards together with steel banding, or log style, made by hollowing out the middle of a log. These types of pipes were installed across the United States, from Philadelphia to Portland, Oregon. As recently as July of 2018, crews unearthed a wooden log pipe in downtown Spokane, Washington on the Idaho border.

New materials for a modern age

By the 1900s, vitrified clay was the piping material of choice for most cities. First discovered in Babylonia in 4000 BC, it’s made by firing clay pipes and throwing salt into the kiln to produce vapor. Clay pipes are very heavy and required water or rail transport, meaning many cities could only install them if they had a local supply of clay. Though popular, vitrified clay requires care during installation.

Another popular material during this time was fiber conduit, more commonly known as Orangeburg pipe, named for one of the manufacturers, Orangeburg Manufacturing Company. Fiber conduit was created by impregnating wood fibers with coal-tar pitch. This pipe material became popular for a number of uses: water transmission, sanitary sewers, electrical lines and more. It grew in popularity throughout the 1800s and the early 1900s. Its popularity declined beginning in the late 1960s as PVC entered the market. Today, no Orangeburg pipe is in use due to its short lifespan.

Cast iron was also a popular material at this time. The first cast iron pipes were installed at Versailles in 1664. In the United States, the first cast iron pipes were installed in Philadelphia in the 1810s to replace deteriorated spruce log pipes. Eventually, Philadelphia was entirely piped with cast iron due to its longevity and ability to withstand higher water pressure. Today, many of the sewer lines in use are piped with cast iron. However, cast iron had a high risk of corrosion, so different coatings were developed. One of the most popular was cement-lined cast iron.

In the 1950s, ductile iron pipe was introduced as an improvement on cast iron. It has higher strength and similar corrosion resistance, making it an attractive material for water and wastewater uses. Similar to cast iron, there were also many types of linings developed to prevent corrosion in line interiors. 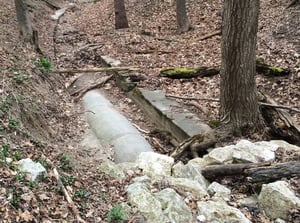 Concrete pipe was also rising in popularity during this time, though it was significantly heavier and more expensive. Prestressed concrete cylinder pipe was first manufactured in 1942 and consists of a thin steel ring encased in concrete. This type of pipe material is still being installed today and is commonly used for larger pipe diameters, storm sewer lines and water mains.

Finally, plastic pipes including PVC, ABS and PEX pipe came into popular use. Although PVC was first developed in the 1860s, it didn’t take off until the 1950s and ‘60s when more precise extrusion techniques allowed for more reliable manufacturing. Today, plastic pipe is an increasingly popular pipe material, used for everything from sewer laterals and residential plumbing to gas distribution and chemical processing. It has some of the highest corrosion resistance and claims a long-projected service life, although to date it’s only been in the ground approximately 60 years—as yet well short of materials like clay, which have a demonstrated service life that can exceed 125 years.

Today, almost all of these pipe materials can be found in the ground and in use somewhere in the United States, though many are reaching the end of their expected lifespans. Each material type has its advantages and disadvantages; each works better in certain applications or under certain conditions. And maintaining them--cleaning, repairing and improving--requires specialized knowledge. As investment in our national infrastructure increases, the durability of these materials will continue to remain a key consideration.