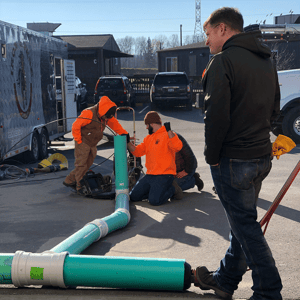 Within a sewer main, service connections are one of the largest sources of infiltration. Older sewer systems in particular may experience problems, as construction requirements and methods in previous eras were less concerned with tight seals and durability. During the first half of the 20th century, hammer taps were not uncommon. A hammer tap, commonly found with vitrified clay pipes, involves using a hammer to smash a hole in the main to accommodate the lateral. Gaps may have been filled with grout, but less conscientious workers also used miscellaneous items such as flattened tin cans or scraps of metal. Modern construction methods are significantly more precise and less leak-prone, but the service connection is still particularly susceptible to groundwater infiltration and many older connections remain in use.

To repair these connections, the industry has devised a variety of strategies. The most popular uses variants of CIPP technology called connection liners. Tee-style connection liners provide structural support and corrosion resistance to the service connections through a felt or fiberglass sleeve impregnated with resin. Tee-style liners span the full circumference of the mainline for one to two feet on either side of the lateral. Depending on the exact style of liner chosen, it can reach as little as six inches into the lateral or as far as 75 feet.

Another style of connection liner is a brim-style liner which features a long tube to line the interior of the lateral with a flat ‘brim’ at the bottom to cover a few inches surrounding the service connection. Brim-style liners provide infiltration abatement and corrosion resistance but, because of the smaller surface area, don’t provide as much structural support. If infiltration has washed away the bedding to the point that the lateral shifts, these liners can fail. But, in cases where the bedding is intact and no risk of shifting exists, a brim-style liner is an appropriate choice.

While grouting and excavate-and-replace are both still in use for repairing failing connections, both have drawbacks. Grouting requires expensive application machinery and has a significantly shorter lifespan. The NASSCO Lateral Committee found that grouting lasts half as long as CIPP, requiring a reapplication of grout after about 25 years. Grout also provides no structural repair.  Excavate-and-replace offers a full structural repair; however, this process is generally twice as expensive as CIPP connection liners and only provides corrosion resistance to the specs of the new pipe.

One advantage grouting has over CIPP is infiltration abatement. “One of the biggest myths some have about CIPP is that it uniformly bonds to the host pipe,” says Eric Sullivan, regional sales manager for LMK Technologies, the producer of T-Liners. “Resin shrinkage causes the liner to eventually pull away from the pipe walls. Even under perfect conditions, like in new pipe, CIPP does not reliably adhere to pipe walls.” In fact, ASTM F3240, one standard for CIPP installation, calls for the use of hydrophilic gaskets at the mainline and lateral liner ends to seal the annular space and ensure long-term water tightness. Grout, meanwhile, will adhere to pipe walls. Grout can also be used to fill voids outside the pipe, stabilizing the bedding. This is why many in the industry are choosing to use grout and CIPP connection liners in conjunction: grout fills voids and seals holes, CIPP restores structural integrity, reduces corrosion and provides a durable, long-lasting repair.

Resin injection is an emerging technology that solves many of the drawbacks lining and grout present. Applied under high pressure, the resin permeates pipe cracks and fills the annular gap between the lateral and main line, curing fully in about 20 minutes. It also fills voids surrounding the pipes, mixing with soil to create support that fully reestablishes the connection’s structural integrity while sealing out groundwater infiltration. The resin also fortifies damaged pipe walls wherever it permeates cracks, and it cures flush to the wall, leaving no diameter reduction or snag points.

At the end of the day, cities and property owners alike are looking to get the most bang for their buck from a service connection repair. It’s a common enough problem that new technologies are always emerging to make repairs easier, less expensive, better performing and more durable.

Vericure ensures the host pipe is rehabilitated to spec and performs as intended by monitoring CIPP for the ideal cure time and temperature.