Over the past 25 years, family-owned contracting company, Guerra Services, has stayed small and specialized, while vastly developing its services. 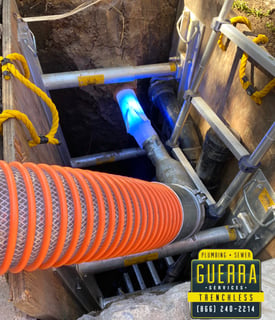 “We haven’t so much grown in numbers as we have grown in technology,” says owner Mario Guerra. “We’ve always been very ahead of the curve when it comes to new technology, and we have become a sort of niche plumbing company where we specialize in certain things.”

Roughly 15 years ago, Guerra Services entered the world of trenchless pipe repair, but with limited technology available at the time, trying to avoid expensive mistakes was a constant stress, Guerra says. That frustration eventually led him to begin outsourcing the jobs and putting focus elsewhere. However, when Guerra became aware of new technology on the market that would enable his team to cure CIPP with LED light, he decided to look into the options available.

After some research, Guerra was gearing up to purchase a piece of equipment offering the new technology, but became apprehensive about some of the features it was missing, he said.

“I realized it wasn’t very far advanced yet,” he said. “There were restrictions on the size of pipe it could be used with, and liner materials had to be purchased through the company which wasn’t located anywhere near us. I wanted to really be sure I was purchasing the right product and I didn’t want to have a machine where I’m waiting for the technology to advance to be fully functional. Ultimately, they weren’t fully ready and there wasn’t a local vendor.” 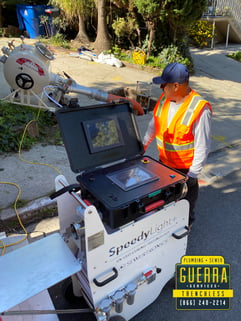 That’s when Guerra was introduced to SpeedyLight+ from Pipeline Renewal Technologies. This equipment offered the capabilities he was looking for, a local vendor for support, and the ability to utilize liners from anywhere, including companies in the area, like MaxLiner and Perma-Liner, he said.

Guerra Services has been using SpeedyLight+ for all of its CIPP jobs since purchasing the light curing system in January 2020.

“It’s a great machine,” Guerra says. “One of the things that really drew me to light-based lining was eliminating the risk factor. All of the liners that we’ve installed came out perfect, and I’m talking perfect. We don’t deal with any wrinkles or any twisting. We have the time now to be able to look at all those little details and not overlook anything. It’s been nothing but great.”

One of the most significant differences using SpeedyLight+ compared to their previous method, ambient curing, is eliminating the “fear factor,” he says.

“You can train anybody to do this and they’ll be successful,” Guerra says. “With ambient, you need someone who has been doing it for a long time. We’ve completely eliminated the risk of messing up, and when we’re curing we know that it’s 100% cured. Our competitors using other methods don’t know what the liner looks like until it’s too late.”

The company has been able to increase its lining revenue by more than 200% since acquiring SpeedyLight+, Guerra says. Not only is the crew now taking on the jobs they previously outsourced, they’re being referred by competitors to take on jobs, he says.

“We get a lot of sub-work from other plumbers who don’t do what we do,” Guerra says. “They’ll have a problem where their conventional ways of dealing with it won’t help, and then we’ll come in and provide a solution or plan of action for that.”

Some of those major projects so far include rehabilitating sewer lines under multimillion dollar homes with marble flooring that cannot be dug up, and curing a line directly under the tellers at a local bank that couldn’t close for line repairs.

“Before we had SpeedyLight+, those jobs wouldn’t be possible,” Guerra says. “Staying ahead of the competition by staying on top of new technology is something we’ve always done. There are many companies relining pipes out here, but they aren’t doing it with LED light, which is why we’ve been able to really stand out with this equipment.”