A Folder Full of Leaks—Now Getting Fixed 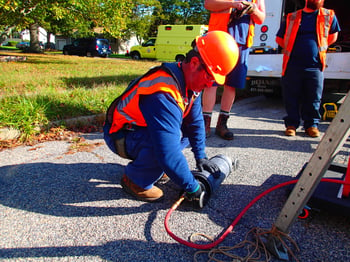 Toms River, a township in New Jersey (population 91,000), has consistently been ranked as one of the safest places to live in the entire United States. That attention to the basic needs of its citizens extends also to sewer infrastructure—over the last several years the township’s municipal utility authority (TRMUA) has implemented an aggressive program to reduce inflow and infiltration, resulting in a $1 million savings in treatment costs in 2016.

But Toms River has now addressed most of the obvious, easily fixed sources of I/I, and the authority is looking for ways to make further reductions. “Every little bit counts when it comes to infiltration,” says TRMUA Rehabilitation Foreman Rich Sistad. “I’ve been keeping a folder for several years, filled with known leaks that were too expensive to get to because they would require digging and trenching in busy areas. We’ve tried different spot repair methods in the past, like short sections of CIPP, but most of them were a hassle to install and didn’t work well. But this year, things are different—we finally have a solution that is quick and easy to install, and we’ve been able to repair up to seven leaks in a single day. It’s really making a difference.”

In early 2017, TRMUA became the first public works agency in its region to use the Quick-Lock point repair solution. Quick-Lock is a stainless-steel sleeve that is positioned in pipelines on a packer pushed by any inspection crawler, and then expanded with a packer (a wheeled pneumatic bladder) so that it locks into place and permanently seals isolated leaks. Sistad first heard of the solution at a trade show and arranged for a demonstration. “I thought it was interesting and promising, so we decided to take a look,” he explains. “The rep came with all the equipment needed, we bought one of the sleeves, and he installed it into a section of clear PVC pipe while we watched—it was impressive.” So impressive, in fact, that Sistad made a small investment in the necessary installation equipment: two packers, one suited for 6-8” lines and the other for 10-16” lines, as well as a dozen of the sleeves for immediate use. He’s since installed several dozen, orders 20-30 at a time, and keeps the sleeves in stock, in various sizes, for rapid deployment. 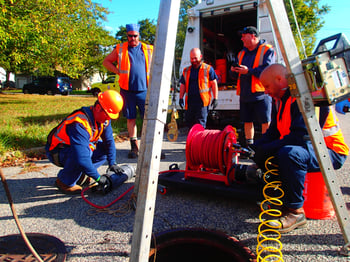 TRMUA uses a four-man crew for Quick-Lock installation, usually accompanied by a two-man jetting truck crew. “Installation is a simple process, but you do have to get the pipes clean before installation,” Sistad explains. “Because it’s a rigid sleeve, any rocks or gravel in the pipe can prevent sealing.” In addition to jetting, pipes are usually inspected with CCTV before insertion.

Quick-Lock repairs are identified from the Authority’s extensive CCTV archive, and from records Sistad has kept. “We have an aggressive TV program, and our engineer watches a lot of the video and makes recommendations,” he explains. “And also, we have a backlog of known issues that I’ve been keeping track of, and now we can finally get to them—it’s a good feeling.” All Quick-Lock installations are inspected immediately after insertion, and Sistad has yet to observe any failures.

Most of the Quick-Lock rehabilitations are focused on classic spot or point repairs—isolated leaks caused by roots, aging pipeline or, especially, construction damage. “A lot of the holes we see were probably caused by digging or backhoe work during construction, and sometimes when people break things they don’t tell anyone,” Sistad says. “Years later, when we notice it, the area is built up with utilities everywhere, and digging up the pipe is expensive and time-consuming.” On occasion, though, the stainless-steel sleeves are used to repair leaks that are scheduled for end-to-end CIPP rehabilitation, because the MRTUA engineer believes they are effective at stopping gushing infiltration, which can otherwise cause CIPP installation to fail. It helps that the Quick-Lock sleeves are low profile when installed, and don’t impede CIPP work or significantly impact the pipe’s carrying capacity.

Quick-Lock sleeves come in several sizes, and two basic styles—with a single beveled end, or with both ends beveled. The twin-beveled sleeves are used for most spot repairs where line breaks are relatively isolated and small, as in construction-caused punctures. The unbeveled sleeves can be butted together in chains to rehabilitate longer sections of pipe. “We have a few infiltration sources that are the result of longitudinal cracks,” Sistad explains. “We just ordered some of the single-beveled sleeves for these repairs and will be installing them in the next couple of weeks.”

“It’s so much better than digging: faster and easier, and safer,” says Sistad. “We don’t have to have our guys working around backhoes, don’t have to disrupt traffic or get near utilities, and our confined space entry is greatly reduced. Basically, there’s just no comparison to digging up pipe—we can just pop these in, and they work.”

Quick-Lock is a relatively new trenchless repair solution, and Toms River is one of the first agencies in New Jersey to commit to a self-install program. They’re not entirely alone in this—Franklin Township Sewerage Authority in eastern New Jersey has been self-installing Quick-Lock sleeves since 2016. But Sistad is comfortable with the investment in innovation. “We’re the leaders around here I guess,” he says. “And that’s fine, because we like to be self-sufficient. I see us continuing with this program without a doubt—after all, I still have 50-60 known leaks in my folder!”